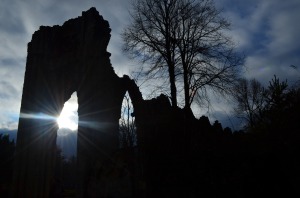 Black cats have always gotten a bad rap, but I’d rather have a black cat cross my path than encounter one of the infamous nocturnal black dogs of folklore (and for the record, I love black cats!). Larger than an average canine, the black dog of legend is usually a portent of doom or death and will often appear to a lone traveler. For this reason, those walking the roads at night would frequently buddy-up with a companion, hoping to stave off its appearance. Even then, the dog might be visible to only one of the two, ascertaining those meant to see the hound could not escape it.

Many cultures believe in a creature or object that is said to be an omen of death. I remember finding a black feather as a child then running home terrified, sobbing to my mother, when someone told me it was a sign of death. She did what mothers do – – calmed my fears, hugged me, and told me I would be fine. Moms don’t lie, but I remember lying awake that night, listening to every creak and groan of the house waiting for something to happen. When dawn arrived, I decided I was safe. Superstitions are always more frightening when examined in the dark, especially through the eyes of a child.

But the legend of the Black Dog was passed from county to county and continent to continent by adults. Sir Arthur Conan Doyle even had his master detective, Sherlock Holmes tangle with “The Hound of the Baskervilles” (my favorite Holmes story).

And then there is Black Dog Tor, a large standing stone said to conceal the spirit of a spectral hound. In all cases, these dogs are utterly silent which makes their eerie appearance all the more spine-tingling. Imagine crossing a grassy knoll silvered by moonlight and watching a bulky apparition with glowing eyes crest the rise.

Black Dogs were also seen at crossroads, footpaths, gallows, gravesites and bridges. Sometimes associated with storms, they were given differing names depending on location and who was telling the tale – – grims, hellhounds, Padfoot, Hairy Jack, the yeth hound, Gurt, and Black Shuck to name a few.

So the next time you venture out when eventide has flowed into moon-drenched night, remember the myths and legends that prompted travelers to seek out a companion in the hopes of avoiding a Black Dog.

At the very least, I suggest taking a deliriously happy canine friend with you. There’s 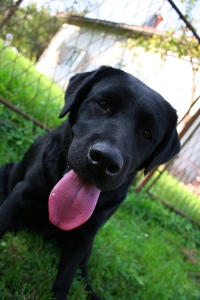 nothing like a floppy-eared black lab to make a Grim realize he got a raw deal and ditch the moody stuff. 😀