Happy Sunday, everyone, and welcome to another Six Sentence Sunday! If you haven’t been by for a visit since the last round of SSS, you probably noticed I’ve done some remodeling. WEATHERING ROCK has a cover and I had to splash it everywhere. Isn’t it gorgeous? It took a few days for my husband to peel me off the ceiling, but I’ve gradually come back to Earth. *happy sigh*

Since Caleb DeCardian and Arianna Hart are sharing a delicious near-kiss on the book cover, I thought I’d get back to their date. Arianna has finally agreed to have dinner with Caleb and (last week), was impressed by the lengths he went to make everything perfect.  If you’re unfamiliar with WEATHERING ROCK, my paranormal romance/time travel featuring a modern day school teacher and a displaced Civil War colonel (who also happens to be a werewolf), you can find the blurb, character list and a book trailer here. WEATHERING ROCK will be released on October 8th by Lyrical Press.

I’m jumping ahead a bit after last week. Caleb and Arianna have been conversing over dinner with her doing most of the talking. She’s finally cornered him about what he did for a living in the past, and he’s told he was in the infantry, in command of a regiment. Picking up there with Arianna speaking first: 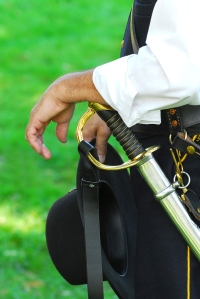 “That would make your rank–”

Arianna balked. At most, she had imagined him a captain. By no means was she an expert on military procedure, but she’d dated a staff sergeant several years ago and knew there were only a handful of full bird colonels in the entire state, all of them over forty. “Aren’t you awfully young to be a colonel?”

Leave it to an inquisitive woman to put a man on the spot! 🙂

I hope you enjoyed my six. Thank you everyone who stops by each week to comment and share your impressions. It’s such a treat to have you visit!

More great reads can be found at the Six Sentence Sunday website. Go forth and devour literary gems!